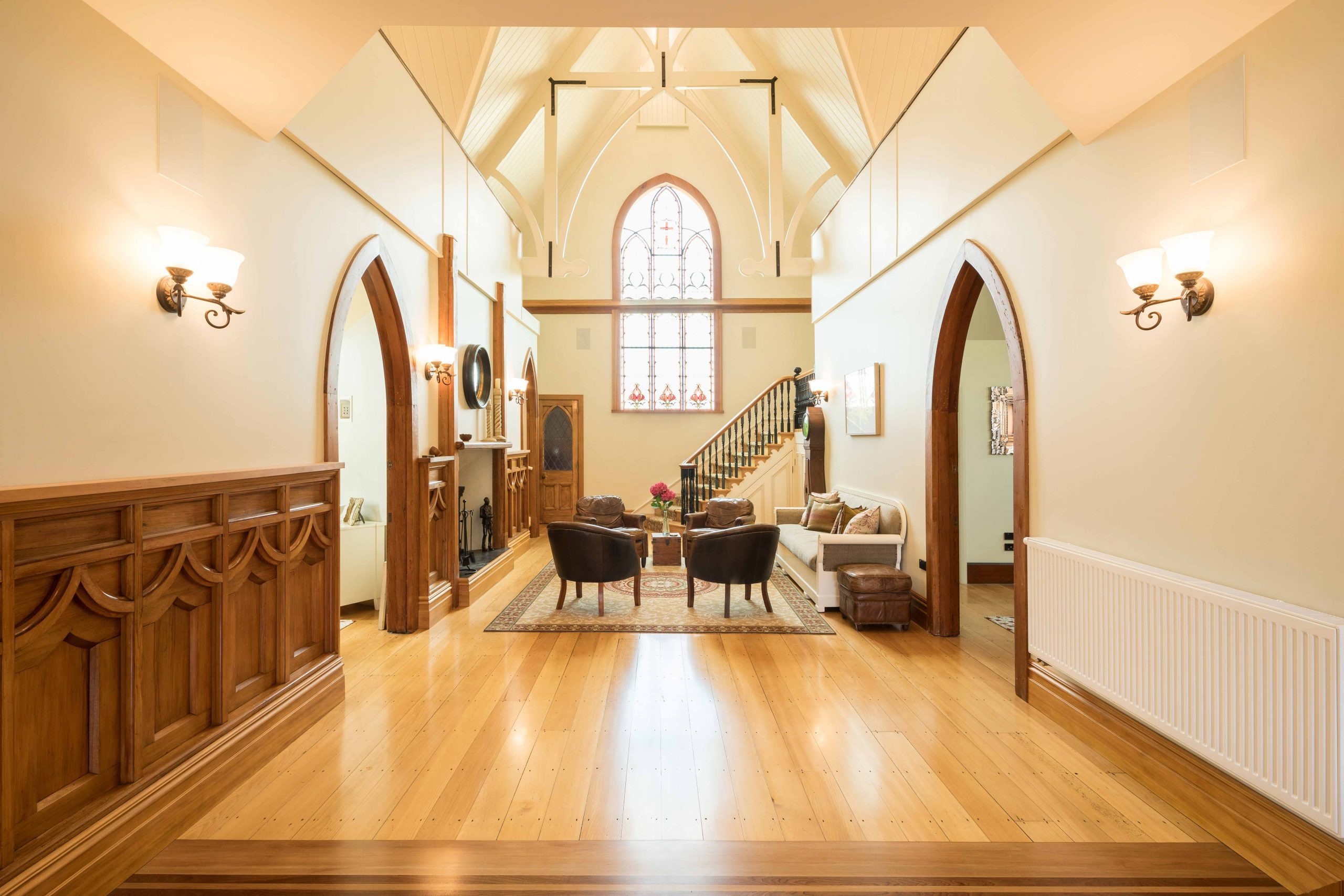 This building had undergone many changes over the years but was just a shell when the current owners Heather and Sven Berger bought it in 2001, and who have lovingly restored the exterior and interior of this consequential building to emulate its former glory as a showcase for gothic revival architecture from 2011 onwards.

This restoration was a family project, Heather and Sven together with their sons and daughter, carefully researched the history of the building, architectural features, materials and techniques used, so they were able to have an appreciation of what and the way the building was constructed.

Many evenings and weekends were spent by the family investigating where they could acquire the materials and gothic design features to ensure the integrity of this gothic revival styled building from a bygone era were re-created and if the features could not be sourced how would they recreate them using their trade skills and ingenuity.

Every aspect of the restoration, down to the smallest detail was scrutinised over the dinner table as this was a family project.

This labour of restoration love has strengthened the family bonds and stands as a testament to the commitment over the six year period of the restoration.

Great care has been taken to ensure architectural integrity, with all materials and decorative features in keeping with the Gothic style of the original building.

One time-consuming issue was how do you incorporate what are classed as modern luxury comforts and technology without losing the integrity of a beautifully restored gothic style building. To answer that we recommend you come and stay with us for a night or two or otherwise have a small intimate wedding or renew your wedding vows.

For your interest, the interior is classed as gothic revival style. The Gothic style originated in the Ile-de-France region of northern France in the first half of the 12th century. There are three essential features which are the hallmarks of gothic revival architecture in this building the pointed arch, the ribbed vault, and stained glass windows.

Benjamin Mountfort, an English emigrant to New Zealand, became one of that country’s most prominent 19th-century architects. He was instrumental in shaping the city of Christchurch’s unique architectural identity and culture, under his influence the Gothic Revival style was introduced to New Zealand, and he designed Gothic Revival churches in both wood and stone. Frederick Thatcher also of Canterbury designed wooden churches in the Gothic Revival style. Sadly post the 2010 and 2011 Canterbury earthquake sequence many of these churches were destroyed and now only stand as testaments to their integral parts in the community in photographs.

Saints provide both a rare and unique opportunity to appreciate the beauty and splendour of a faithfully restored interior executed in the true gothic revival style.